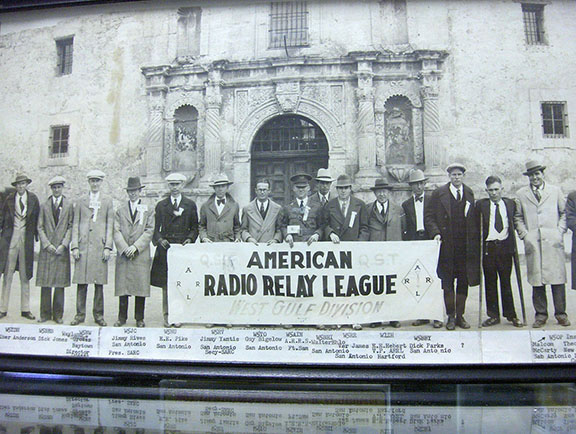 SARC has a General Membership meeting every month of the year except December. These meetings are usually held at 7:00 p. m. on the second Thursday of the month. Visitors are welcome to attend. Currently our meeting are held at Blanco BBQ on Blanco Rd, San Antonio.  A 20-40 minute program, normally a technical topic of interest to hams, is presented at nine (9) of the eleven (11) monthly meetings in a year. In the other two (2) meetings the focus is on Radio Fiesta and Field Day respectively. The next meeting time and program is usually posted as a News Blast! at this top of this page and in the Bexar Wire newsletter.

Radio Fiesta is a convention for hams. Such conventions are often called hamfests. Because SARC is in San Antonio where almost everything is a Fiesta, the hamfest is a two day event starting on Friday and ending on Saturday afternoon. SARC’s event is called a Radio Fiesta. Radio Fiesta includes dealers, a flea market, a tailgating market, a technical and informational program of presentations, DX Card Checking, and amateur radio license testing. Check the Radio Fiesta page for more information.

Field Day is a nationwide ARRL sponsored event on the fourth weekend of June where SARC sets up under a tent in a field environment with emergency generators and temporarily erected antennas. Contacts are then made and logged. The real objective is to give members experience in operating in an austere environment like those that may be faced in emergency situations and to bring ham radio to the general public. SARC has operated from the field adjoining the City of Shavano Park who have been great hosts and friends of amateur radio.

Jamboree On The Air (JOTA) is a nationwide ARRL sponsored event on the third Saturday of October. This event is for Boy Scouts, Cub Scouts, Girl Scouts, and Brownies. It is intended to introduce them to ham radio and, under supervision of licensed hams, get them On The Air.

Volunteer Examiners conduct official amateur radio licensing test sessions as a part of ARRL’s Volunteer Examiner Coordinator operation.  We offer tests several times a year, and more information can be found at our testing page. In addition, tests are open to all members of the public and are also conducted during Radio Fiesta.

This website uses cookies to improve your experience while you navigate through the website. Out of these, the cookies that are categorized as necessary are stored on your browser as they are essential for the working of basic functionalities of the website. We also use third-party cookies that help us analyze and understand how you use this website. These cookies will be stored in your browser only with your consent. You also have the option to opt-out of these cookies. But opting out of some of these cookies may affect your browsing experience.
Necessary Always Enabled
Necessary cookies are absolutely essential for the website to function properly. This category only includes cookies that ensures basic functionalities and security features of the website. These cookies do not store any personal information.
Non-necessary
Any cookies that may not be particularly necessary for the website to function and is used specifically to collect user personal data via analytics, ads, other embedded contents are termed as non-necessary cookies. It is mandatory to procure user consent prior to running these cookies on your website.
SAVE & ACCEPT